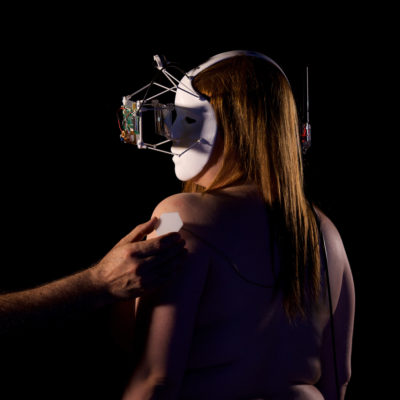 María Castellanos is a Spanish artist and researcher, she has a Degree and a Doctorate in Fine Arts from the University of Vigo, Spain, with an Extraordinary Phd Award 2016.

Her artistic practice focuses on the relationships between human beings and machines, and in recent years she have centred her research on hybridizations between cyborgs and wearables as a paradigm of the extension of human sensorial capabilities. And the creation of complex systems that promote the communication and the understanding between humans and plants.

Her work has won awards like VERTIGO STARTS (2017), a prize granted under the aegis of EU-Horizon 2020, an initiative led by Centre Pompidou and IRCAM , Paris, and the Fraunhifer. Gesellschaft, Germany, to foster collaboration between art practitioners and R&D projects. In 2016 she was awarded the Antón Scholarship for Sculpture Research from the Museo Antón in Candás (Asturias). Also in 2016 she was nominated for the STARTSPrize’ 16 at Ars Electronica, Linz (Austria) and the Japan Media Arts Festival, Tokyo (Japan).

During the last years she has been artists in residence at OsloMet University, in the framework of the FELT Project –FuturEs of Living Technologies–, 2019; a research stay at CITA– Center for Information Technology and Architecture–, in the context of VERTIGO STARTS 2017. Copenhagen; a research residency at SoftLab at Sliperiet, Umea Universitet (Sweden); and the Next Things residency at LABoral Centro de Arte (Gijón) and Telefonica I+D (Barcelona), 2015.

She has been teaching at the Contemporary Art Master of the University of Vigo (Spain), and she has been invited by several Universities and Institutions to give talks and workshops about her artistic practice.